I've watched a lot of soccer in my lifetime being a fan of one of that red team in Manchester. I've subscribed to MLS DirectKick the past four seasons, I'll even sit down and watch Liga MX en Español. Saturday night was first for me. I was so excited to watch FC Cincinnati launch their inaugural season on Saturday night. I can't say I've ever sat through an entire soccer match on Youtube. Check that experience off my bucket list. Even with all the matches I've seen in my life, Saturday night's loss felt different to me. Maybe it's because I actually have a connection to a team for the first time in my life. Here's to hoping the good guys can start their winning ways this weekend in Pennsylvania. On to the show!

We also looked ahead to Sunday's match against Bethlehem Steel. The Steel are coming off a 1-0 win over FC Montreal in Canada on Friday night to kick off the USL season. Just like Charleston's goal was a fluke against us, Bethlehem's goal was a bit of a fluke as well.

We finished up the show by discussing the upcoming meet and greet on Thursday night at Rheingeist. Plus season tickets have mailed out to season ticket holders! Have you received yours? What are your thoughts?

Plus we also give our score predictions for Sunday's Bethlehem Steel - FC Cincinnati match.

As always we'd love your feedback about Episode 7! You can email the show at cincysoccertalk@spnt.tv. We'd love for your to join us at our Facebook page as well! Like us at Facebook.com/CincinnatiSoccerTalk.

The show's RSS feed is http://cincinnatisoccertalk.libsyn.com/rss.

FC Cincinnati and the USL Season is Finally Here 0 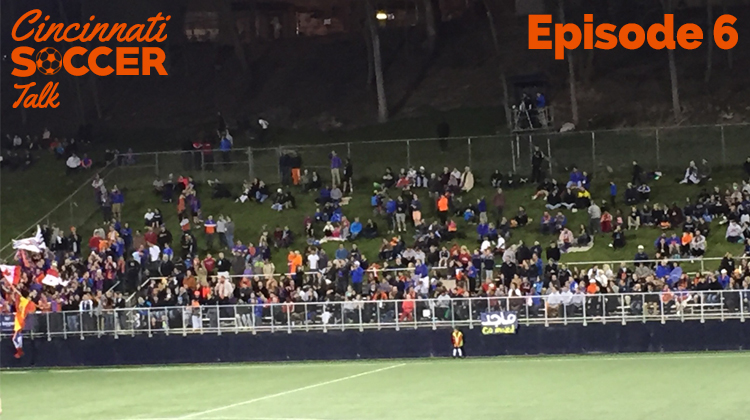 It may have only been a friendly on Friday night, but the FC Cincinnati faithful packed the house at Xavier to watch the orange and blue in their first game in the Queen City. What a spectacular turnout. The supporters groups were out in force and working together on chants and marching to the game. The Listermann's event prior to the game sounded like it was a hit as well. It almost feels like the 2-0 win over the Muskies was just a side note to the night. It was great to see FC Cincinnati close out their preseason unbeaten though as they get set to head down to Charleston to take on a very tough Battery side.

We opened this week's show by discussing the great turnout by fans to the friendly at Xavier. Bryan recapped quite elegantly here. Oh by the way, there was a game on Friday night and it finished 2-0 to the good guys.

We were really excited to have back on the program Chad Hollingsworth from the USL Show and Scratching the Pitch. Chad was impressed with the preseason that FC Cincinnati had and thinks they have a loaded roster, one that can possibly compete for the Eastern Conference crown.

We finished up the show by discussing the radio debut of the John Harkes Show from the Moerlein Lager House in downtown Cincinnati. Our very own Brad Weigel was there representing CST. Yours truly was proud to be the first caller in the history of the program too. #humblebrag

Plus we also give our score predictions for Saturday night's USL opener for FC Cincinnati and more.

As always we'd love your feedback about Episode 6! You can email the show at cincysoccertalk@spnt.tv. We'd love for your to join us at our Facebook page as well! Like us at Facebook.com/CincinnatiSoccerTalk.

The preseason fixtures for FC Cincinnati resumed this past weekend when the club made the short trek up to Indy to take on Indy Eleven, an NASL side. They'll also be playing their first match in the Queen City this Friday night when they take on Xavier University. After the draw in Indy, can FC Cincinnati continue their unbeaten run in this preseason against the Muskies?

We opened this week's show by discussing the 1-1 result in Indianapolis over the weekend when FC Cincinnati took on Indy Eleven. A decent result considering Indy Eleven is a NASL side. The orange and blue had the lead after a 2nd half goal by guess who, Luke Spencer. Unfortunately Indy Eleven fought back and scored in the 85th minute to secure the draw.

We also look ahead to Friday's matchup against Xavier. Don't forget that Listerman's is hosting and event prior to the match!

The club recently announced they have surpassed 4,000 season ticket sales. Plus we discuss this article regarding youth soccer and it's involvement with FC Cincinnati.

After reading this article over at 6th Day Soccer, we discuss whether or not FC Cincinnati should have a nickname? What nickname would you like the club to have? Email us at cincysoccertalk@spnt.tv.

As always we'd love your feedback about Episode 5! You can email the show at cincysoccertalk@spnt.tv. We'd love for your to join us at our Facebook page as well! Like us at Facebook.com/CincinnatiSoccerTalk.

Can you believe we are ONE MONTH away from the home opener for FC Cincinnati? It feels like yesterday that the team was formally announced and here we are just a few weeks away from the club kicking off their inaugural campaign. Don't miss out on any of the FC Cincinnati action this summer though, plenty of tickets are available. Don't wait! Tell them we sent you!

We opened this week's show by discussing some of the upcoming friendlies FC Cincinnati will be taking part in. On March 12th, the team will be traveling to Indianapolis to take on NASL side Indy Eleven in a closed door friendly. The club will also take on Xavier University on March 18th at Xavier. Then on April 5th the club will host a "dress rehearsal" at Nippert Stadium when the University of Dayton comes to town.

We also took a closer look at the FC Cincinnati 2016 schedule now that the kickoff times have been finalized for the season. Lots and lots of home games in June and July. The road schedule really picks up in August and September.

Really excited about our guest on this week's podcast. We were privileged to have Jeff Berding, the President and General Manager for FC Cincinnati. Jeff discussed his background in sports, particularly his 19 years with the Cincinnati Bengals. Jeff also reveals interesting news surrounding Nippert Stadium's reconfiguration. Of course the topic of MLS expansion had to come up.

We also capped the show by discussing the recent price drop at the FC Cincinnati Online Shop. We also hope you'll take part in our #FANTHEWALL campaign and like our Facebook page at facebook.com/cincinnatisoccertalk.

As always we'd love your feedback about Episode 4! You can email the show at cincysoccertalk@spnt.tv. We'd love for your to join us at our Facebook page as well! Like us at Facebook.com/CincinnatiSoccerTalk.

Well how about that! FC Cincinnati becomes champions in the first competition they take part in. I don’t care that it’s a preseason friendly tournament. Hey, silverware, is silverware. Ask Arsenal, am I right? Regardless, the club went down to Florida and took care of business against some quality sides. Plus, any time a USL side can knock off a MLS side it’s definitely newsworthy. Let’s hope that momentum carries over into the regular season which is approaching rapidly.

We opened this week’s show by recapping FC Cincinnati’s tournament championship last week in the IMG Suncoast Pro Classic down in Bradenton, FL. During the week the club managed a few firsts. In the 2nd game of the tournament, FC Cincinnati knocked of MLS side New York City FC 2-1 for the franchise’s first win. In the club’s 3rd game they knocked off HB Koge from Denmark 4-0 securing the franchise’s first clean sheet.

Speaking of firsts, on this week’s podcast we welcomed Dan McNally, the Vice President of Operations for FC Cincinnati. He’s the first member of the club to join us on the podcast. Fitting considering he was the club’s first hired employee. Dan fills us in on his role with the club, how he managed to land a gig in operations in the first place. He also hinted at some of the upcoming plans the organization has this summer to enhance the fan experience at Nippert Stadium.

We also capped the show by discussing the changes/goals of Cincinnati Soccer Talk. We also were excited to mention our newest teammate here at CST, Michael Walker. Michael’s been crushing it with blog posts this week and we’re thrilled to have him on board contributing!

As always we’d love your feedback about Episode 3! You can email the show at cincysoccertalk@spnt.tv. We’d love for your to join us at our Facebook page as well! Like us at Facebook.com/CincinnatiSoccerTalk.